VRNE stands for Virtual Reality Nantes Experience. Since three years, VR Master’s degree students from l’Ecole de Design Nantes Atlantique design immersive experiences around the universe of Jules Verne. This work lead to an exhibition part of the Nantes Digital Week, a major french event about digital culture. Here is the story of the third edition.

1A journey to the moon

For this project, we have been inspired by Jules Verne’s journey to the moon described in his two novels: From the Earth to the Moon and Around the Moon. It is the story of crazy weapon manufacturers who decided to send a few people to the moon using a giant cannonball. 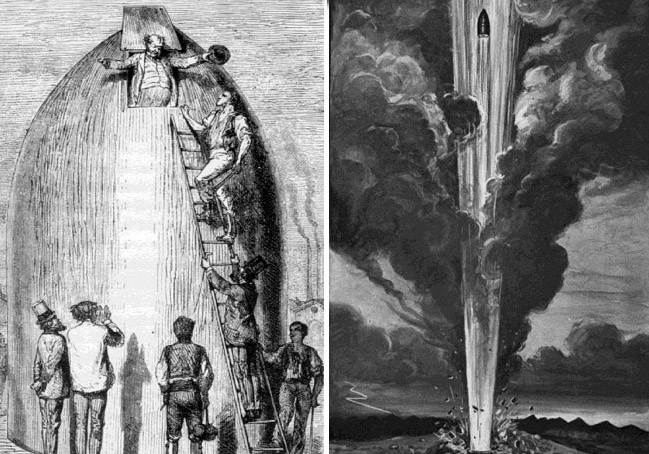 As a group of 10 students, we splitted the journey in three parts: take-off from earth, orbit around the moon and landing back to earth. We developed the landing experience in 2 months.

After studying the novels, we did researches about the broad universe of Jules Verne. We created moodboards to define the graphic identity of the project. Then, we came up with concepts to turn this landing into an unforgettable experience. As the novel does not give a lot of details about the trip back to earth except for the sea landing, we had a lot of freedom. In our limited 2-minutes time frame, we wanted the user to travel as much as possible. Our landing is divided in three parts : space, atmosphere and underwater. 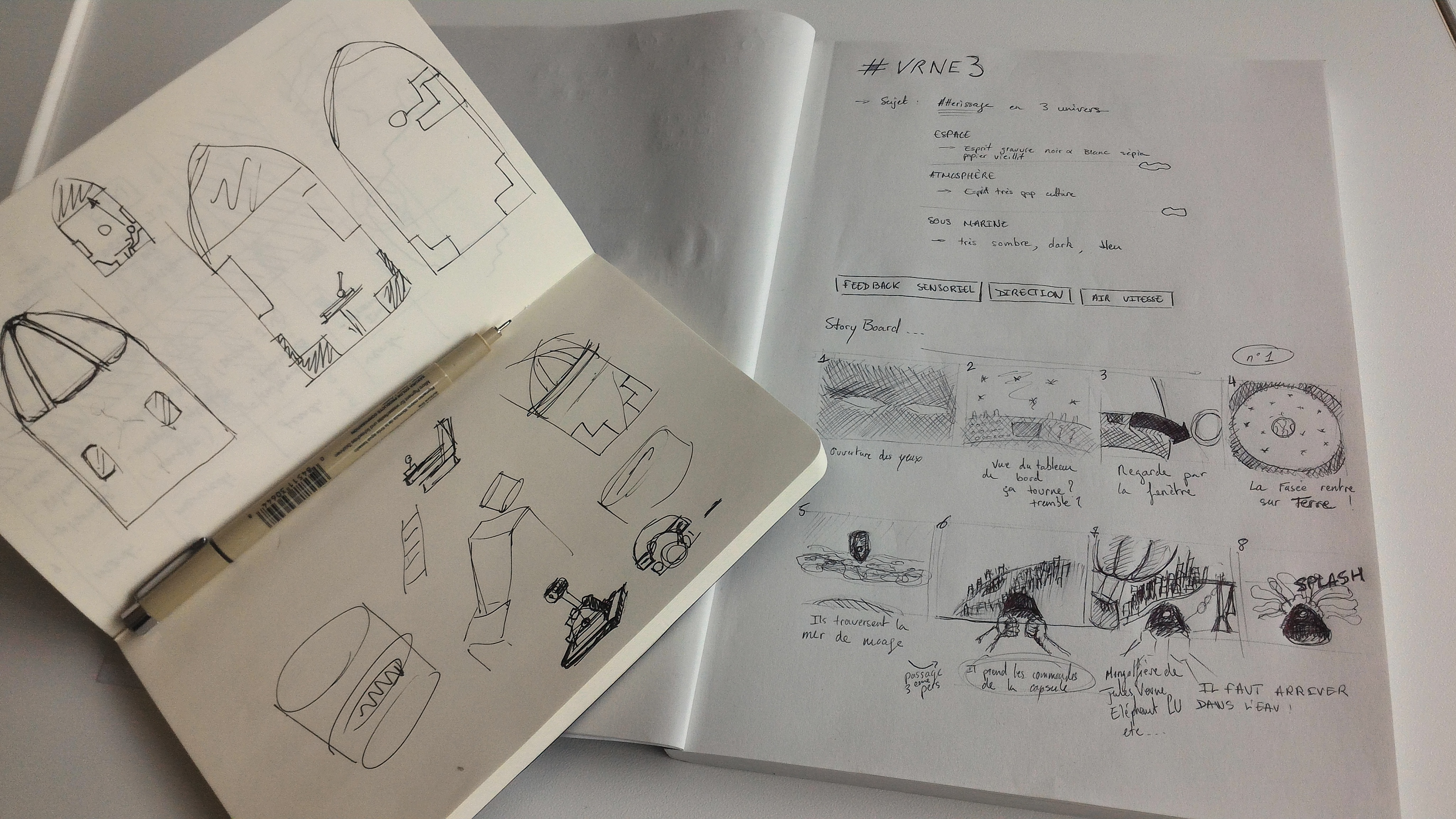 Storyboard of the landing.

To achieve this journey, you will be in control of the spacecraft to lead it through portails. This is the main gameplay mechanic.

If you board with us, you will not land near Baltimore as described in the novel but in Nantes’ river. This is a way to include our experiment in the Nantes Digital Week festival. We designed a seamless multi-environment experience using inspiration from Jules Verne’s literature. In order to prevent motion sickness for first-time VR users, the story goes from calm to intense.

Take a seat in our shuttle and travel from space to earth, from 19th century to nowadays.

Designing a VR installation to tell a story implies a huge involvement from the user side compared to traditional mediums. The increased feeling of embodiment can lead to more extreme reactions. Moreover, VR has limitations due to the hardware. For instance, duration and rhythm needs to be adapted.

The installation was both a software and a hardware challenge. We worked on them simultaneously during the whole process. Since a lot of people were about to try our installation, we had to build a resilient one.

We built the software using our knowledge of the whole production line. Modeling was done using 3DSMax, texturing using Substance Painter and we integrated using Unity. To make the software as reliable as possible, we tested to application for days to patch every bugs.

View of the 3D control panel.

In order to live a proper earth landing, you need a lot of feedbacks. That’s why we used a vibrating mattress, a pair of headphones and a joystick. We used a chair to simulate the position of an astronaut in his shuttle. The lay down position offers a lot of immersion and provide security to first-time users. The installation had to be physically strong because of the crowd but also strong in our way to make people understand our story.

L’École de Design Nantes Atlantique partnered with a magic theater named Le Lieu Magique to exhibit our installation. As virtual reality did not fully reach mass market yet, it is our chance to communicate about this emergent technology. As immersion does not start in VR, we created a scenography to create a seamless transition from real to virtual.

Video of the exhibition.

We provided as much precautions and support as possible to the visitors in order to create a pleasant experience. We had a bunch of different reactions from indifferent to extrême. We learnt a lot about how non-expert people apprehend VR.

Our installation was able to receive two people in the same time. It was such an amazing moment to see families or friends sharing our VR experience. We tried as much as we could to provide the best first-time VR experience to people.

A VR experience in 30 hours